With the latest issue about President Noynoy Aquino who drew flak on attending a Christmas party despite the disasters and casualties brought by the tropical storm "Sendong" in Iligan City, Cagayan de Oro City, and other parts of Mindanao, Kris and her sisters were one in defending their president brother. As quoted, Kris said in her morning show Kris TV:

TO KRIS AQUINO: AN APOLOGY FROM PNOY AND PAGASA WOULD HAVE SUFFICED

The blogger named PatricioMangubat stated that Kris Aquino should have just apologized with what she said. He stated that during the demise of former president Corazon Aquino and former senator Ninoy Aquino, "every single Filipino stopped", and "paid respect". He said Filipinos mourned and lives stopped during their deaths, and Filipinos are not like Kris "who doesn't care".

WHEN YOUR MOTHER DIED, EVERY SINGLE FILIPINO STOPPED WHATEVER HE WAS DOING AT THAT TIME, AND PAID HOMAGE TO HER.

NOW, YOUR BROTHER IS PRESIDENT AND HE CAN'T EVEN SPEND A FEW MINUTES ATTENDING TO RELIEF AND EVACUATION OPERATIONS IN CAGAYAN DE ORO AND ILIGAN?

MANY PEOPLE DIED KRIS. FATHERS AND THEIR KIDS, MOTHERS AND THEIR BABIES. WHOLE GENERATIONS WERE WIPED OUT.THE ENTIRE CAGAYAN WAS ALMOST TRANSFORMED INTO A WASTELAND AND YOU WILL TELL US THAT "LIFE SHOULD GO ON...AND IT WILL NOT BE GOOD IF OUR LIVES STOP FOR A WHILE AND FOR US TO MOURN?"

OUR LIVES STOPPED WHEN YOUR FATHER AND MOTHER DIED.

DON'T EVER TELL US, US, THE FILIPINO PEOPLE THAT WE WILL NOT MOURN OUR FELLOW FILIPINOS WHO DIED DURING THIS TYPHOON.

WE CARE FOR FELLOW FILIPINOS, POOR ONES, WHO BECAME VICTIMS.

MORE THAN A THOUSAND LOST THEIR LIVES BECAUSE OF THE INGRATITUDE AND THE INEPTITUDE OF THEIR LEADERS!!

THOUSANDS MORE LOST THEIR FUTURES BECAUSE OF THE CALLOUSNESS OF LEADERS LIKE YOUR BROTHER, KRIS!

A MERE APOLOGY WOULD HAVE SUFFICED.

The post got mixed reactions, with comments on and off the side of the blogger. See some comments below: 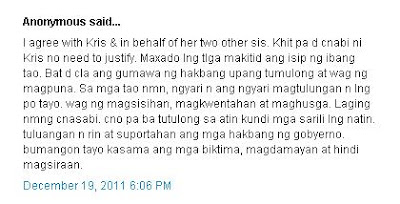 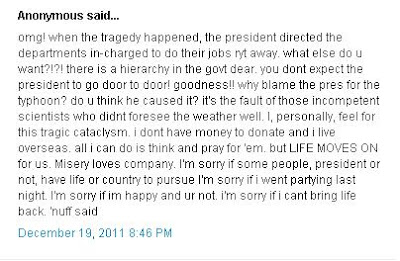 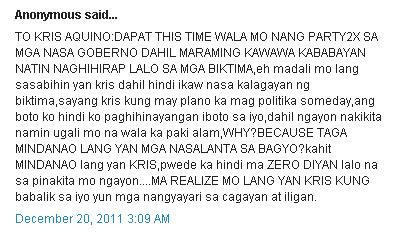